A pre-nup helps to protect the assets you bring into a marriage if you do ever separate at a later date. It isn't just about financial value. You might have possessions with sentimental value you want to keep in your family, or a business in which you want to remain control.
These templates allow you to write your own private agreement. Note that this type of document is not currently legally binding (whether you write your own, or have a solicitor write one for you), but if reasonable, is likely to be upheld in court. 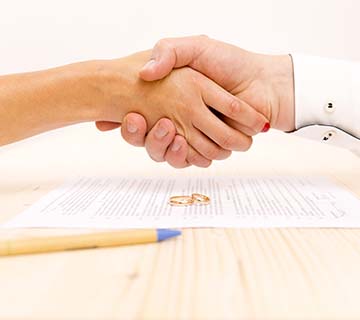 Marry knowing that it is for love and not money. A prenuptial agreement (also known as a premarital agreement) is a legal document between a couple, freely entered into before marriage, which outlines how they intend to divide their assets and liabilities in the event of divorce or separation. It helps you to plan how you will divide your current and future wealth between you and your husband, wife or partner should you decide to divorce or separate in the future. It will also help you control your ownership of important assets such as your house, sentimental possessions and your business.

This version of our prenuptial agreement has the single purpose of enabling each of the new marriage partners to protect ownership of the assets he and she brought into the partnership in the event of breakup. It is a simpler agreement for couples who are independently financially secure before the marriage or partnership, and for whom the concern is the retention of ownership of personal assets such as heirlooms or a business, rather than financial security. The document is drawn to meet the latest prospective requirements for the enforceability of a prenuptial agreement.

How our service works

Edit Your Document
Download your document & complete it at your own pace. Our guidance notes explain what to consider and how to edit.

Upload for Legal Review
Let our legal team check that the document does what you intend.

Backed by our watertight guarantee

If the document isn’t right for your circumstances for any reason, just tell us and we’ll refund you in full immediately.

We avoid legal terminology unless necessary. Plain English makes our documents easy to understand, easy to edit and more liklely to be accepted.

You don’t need legal knowledge to use our documents. We explain what to edit and how in the guidance notes included at the end of the document.

Support from our legal team

We offer free support by email in respect of editing the document. You can also use our Document Review Service if you want to our legal team to check that the document will do as you intend.

Up to date with the latest law

Our documents comply with the latest relevant law. Our lawyers regularly review how new law affects each document in our library.

What is a prenuptial agreement?

A prenuptial agreement (also known as prenup, prenup agreement, premarital agreement, or prenuptial contract) is a legal contract used when two people, who intend to get married or enter into a civil partnership, want to sort their financial affairs in case they decide to divorce or separate in the future.

The Net Lawman prenuptial agreements have been written to make sure they are legally enforceable under Irish law. We understand that no two people have similar circumstances in the event of marital breakdown therefore Net Lawman prenuptial agreements covers a very wide range of possible outcomes and also deals with many matters to be agreed upon in your marriage. The parties can choose from these options without any undue influence.

This prenuptial agreement ensures that the parties discuss and decide on every kind of asset they own. Considering that Irish law does not recognize the concept of community property, it is extremely important to draw a distinction between separate property (owned separately) and marital property (owned jointly). Our agreements require you to list all assets for each property. These include income, properties, financial investments, pension rights, intellectual property, possessions etc. The prenuptial agreements also set out how assets and liabilities will be divided if you separate permanently or in the event of divorce.

divorce settlement as it likes. Whether you create your prenuptial agreement yourself, or ask a solicitor or family law expert to do it for you, there is no guarantee that your wishes will be followed exactly.

What should a prenuptial agreement cover?

These agreements contain an inventory of your assets and liabilities and details how the couple intends to divide it in case of divorce. In order to do this, such agreements should contain;

The law in these prenuptial agreements:

Family Law Act 1995 and Family Law (Divorce) Act 1996 set out what a judge should consider when dividing assets. The principles can be applied differently, and the actual outcome will very much depend on the person judging your case. However, a well written, sensible agreement is highly likely to influence a judge's decision.

Why do you need a prenuptial agreement?

You need this agreement to protect your financial assets because it primarily sets out how the assets and finances are divided if the couple divorces. It will also act as a guide for the judge for property division if the marriage breaks down as long as the judge considers the agreement to be reasonable and fair. The couple should keep in mind to reflect both their interests in the prenuptial agreement.

Who needs a prenuptial agreement?

It is commonly viewed that only wealthy people should enter into such agreements before getting married however, there are many instances where the parties should consider having a prenuptial agreement in place. One or both parties may:

Do you need to disclose all your finances?

Yes, full financial disclosure is an important prerequisite to having your agreement enforced in the court. If you do not wish to delay the process of divorce then make sure that you disclose all your assets, liabilities and income so that it is not challenged later on.

Is a prenuptial agreement legally binding?

Prenuptial agreements are not legally binding in Ireland. This means that the agreement will not automatically be enforced by the Irish court. However, the agreement is likely to be upheld by the court if certain requirements are met. These are:

It should be signed a reasonable time ahead of the marriage. Any time before 4 weeks of the ceremony is considered reasonable.

Should the prenuptial agreement be registered?

While there is no requirement to have the prenuptial agreement registered with any authority, it is good practice to have it attested by the commissioner of oaths. This will help you to present it as evidence in court proceedings. This can also be done at the time the court proceedings begin.

Do you need independent legal advice before entering into the prenuptial agreement?

Do you need to go through divorce proceedings after having a prenuptial agreement in place?

Yes, you will still need to go through the divorce proceedings. Having such agreements in place will help you to speed up the process but it will not help you to avoid it altogether.

Can you change anything in the agreement once it has been signed?

What happens to the agreement if the spouse dies?

These agreements don’t only contain proper provisions for property divisions but it also contains provisions to protect property if your future spouse dies, for example, the agreement can set out whether or not the surviving spouse has the right to claim the property. Do remember that the agreement does not work as a will.

We stock two versions of premarital agreements. One document covers a wider range of possible outcomes and helps you define your intentions over broader areas by providing a framework that allows financial disclosure of each party.  The other one is simpler version of that has been written for couples who are likely to be financially independent before the marriage or partnership and for whom the concern is about ensuring that wealth and assets remain in possession of whichever one brought them in, should the marriage fail. We expect that this document will be more suitable for older couples who have already accumulated wealth, and who perhaps are marrying for a second time and learned to have recorded specific information about their wealth rcorded from previous relationship.

What customers thought
Priscila Elias
The document fulfills what we need and also we could count on Net Lawman's team to help us with all the doubts we had as we filled up the contract. Quick answered us every time we needed them. I trully recommend them.
IAN CAPPIN
Good!
Your AccountAbout UsContact Us
Privacy NoticeTerms & Conditions