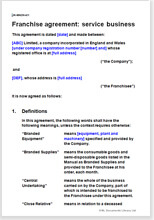 This franchise agreement is for a business that predominantly sells a service to the end customer: whether to B2B services such as accountancy, law or provision of water coolers; or to B2C, such as window cleaning, home maintenance, hairdressing, health and fitness sessions or sports classes. The franchisee may also sell goods, such as branded consumables that complement the service.
About
Preview
Why from us
Ask a question

About this franchise agreement

This is a franchise agreement for a business that predominantly sells services to other businesses or to consumers. The company may also sell goods, such as branded consumables. The different types of business for which this agreement is suitable are vast and could range from branded dance classes to cleaning services, to professional service provision such as accountancy or law.

The agreement covers an enormous number of issues important to franchising and we believe it is comprehensive enough to be used by the largest franchise chains. For smaller businesses, it should be an ideal basis from which to craft an agreement that not only protects the rights of the franchisor, but also impresses prospective franchisees.

We would expect this agreement to be used by a solicitor or other franchise advisor. However, because the key to drawing a good franchise agreement relies on knowing the nuts and bolts of how the business works (rather than knowing complicated law), a business owner could also use it with ease. Use of plain English makes every sentence clear.

Should you be buying an agreement from an on-line retailer?

The advice from the largest association of franchisors in the  Republic of Ireland, the Irish Franchise Association (the IFA), is that you shouldn’t use an advisor who isn’t a paid subscriber to their association. That advice extends to franchise agreements bought from online retailers. This isn’t impartial advice. The trade association is comprised of experienced and knowledgeable people, but it is a private company, commercially operated to promote and to protect the financial interests of its subscribers.

There is no additional qualification required to practice franchise law, just as there isn’t to being able to draw a lease. Commercial experience is the important quality to seek.

When it comes to selecting a franchise agreement from an online retailer, we suggest that you look at templates from several different suppliers in order to evaluate which one is most comprehensive and suits you best. Templates are not expensive compared to the cost of a solicitor's time, and the benefit to your business of getting your franchise agreement right is enormous. Bear in mind that a short agreement,regardless of where it is bought, is unlikely to protect your business sufficiently,not because the law relating to franchising is overwhelmingly complex, but rather because the practical considerations of how the franchise will work require more than a few pages to record them.

The Irish Franchise Association promotes ethical franchising. We agree with this, not as a matter of philosophy but because a successful franchisor is one who helps his franchisees to create profitable businesses while he expands his own. Your franchise agreement has to form the basis of a sound and profitable deal for both sides.

The law in this franchise agreement

There are no specific laws or regulation for franchising. The law of franchising is for the most part governed by the ordinary principles of contract law, the laws relating to intellectual property and also, in many instances, competition law. Your franchise agreement is governed by common law. That gives you great freedom in structuring the arrangement in the best way for you and your franchisees. You can set the rules as you like. However, your prospective franchisees and their advisors will look carefully at your proposed agreement.

That means that the agreement becomes very important in recording the rights and obligations of the franchisor and the franchisee. It should reflect accurately and in detail the terms agreed. The more comprehensive the franchise agreement is, the less likely there are to be misunderstandings and disputes later on.

Businesses for which this franchise agreement would be suitable

This franchise agreement has been drawn for:

Examples of businesses that could use this agreement include those:

The agreement is comprehensive enough to be used by a business of any size, but we assume that the business will be small or medium sized, perhaps with several established branches already. The franchisor may be new to franchising, or may be looking to extend into Ireland.

The franchise territory can be of any size, from part of a town to a continent. Generally, it is more advantageous to the franchisor to keep the area small and grant licenses to operate in additional areas to the same franchisee later. This agreement can be used to grant territory outside Ireland.

We have given the buyer of this document a large degree of control over what the franchisor will give and what the franchisee will do in return. We have included the usual provisions such as:

Protection of his investment is likely to be very important to a franchisee. The agreement covers this in detail, from franchise renewal rights, transfer with pre-emption to intellectual property that the franchisee might create. These should provide fair terms that incentivise the franchisee and allow him to benefit from having built up his franchise without the franchisor relinquishing too many rights.

This is one of the longest Net Lawman documents with 31 pages (excluding guidance).

The contents include the following paragraphs:

Related Agreements
What Our Clients Say